You are here: start » murehej 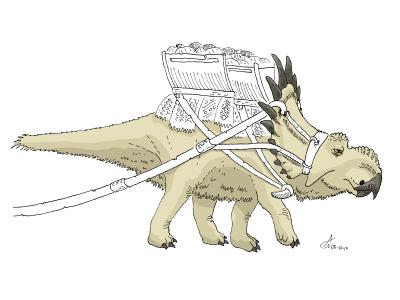 A close relative of the much larger rheshjere - indeed, separated by it only by a few million years of independent evolution - the murehej is a precious resource in the driest regions of Asheenagiji, its sand-colored pycnofiber coating as efficient at protecting it from the diurnal heat as from the nocturnal cold. In its native semi-desert and brushland, it uses its beak - much more massive than that of the rheshjere, relatively to overall body size - to dig up drought-resistant tubers, crack open coconut-like pods, and break through mud crusts in search of moisture beneath. Heavy folded lids protect its eyes from windblown sand. In centuries past, their resistance to the temperature swings typical of continental interiors and their ability to survive several days without drinking liquid water has made them immensely useful to transport people and things beyond the deserts. The chromatic properties of its collar are not as spectacular as those of its larger cousin: rather than producing specific patterns, they make the whole collar darker to absorb sunlight, or lighter to reflect it, serving as a very efficient thermoregulatory system.