You are here: start » vesaviho 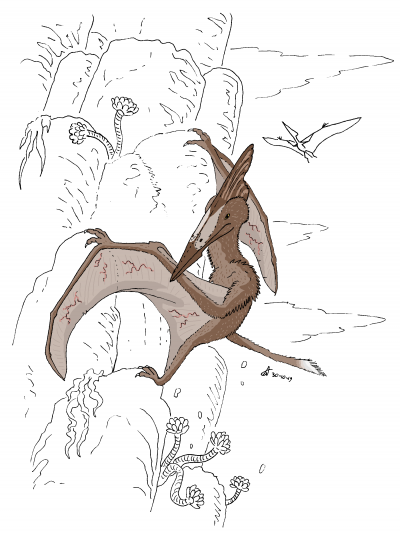 The vesaviho is among the last representatives of a rather obscure group of pterosaurs, the Chaoyangopteridae, known to the inhabitants of Earth from fossils of the Early Cretaceous, but in reality surviving just long enough to be sampled for Nekenalos. Many of their descendants on the new planet specialized as coastal fish-eaters. Two features that distinguish the vesaviho from its chaoyangopterid kin are considerably larger and stronger wing-fingers, useful to hold a grip on sheer cliffs, and an elongated tail, ending in a sort of brush of white pycnofibers as a display structure. Most of the time, this pterosaur would hang motionless from the dark volcanic rocks, one eye turned to the sea, naturally hidden by its dull colors. When, in the appropriate season, a vesaviho flies along the seacliffs in search for a mate, it is by the bright tail-brushes that it recognizes them; the attractiveness of the tail-brush is a strong indicator of the animal's health, and thus of its success in detecting fish schools and avoiding marine predators. A thick pycnofiber coating covers the chest, neck, and upper arms, where blood is withdrawn during the coldest nights.