You are here: start » zarmat 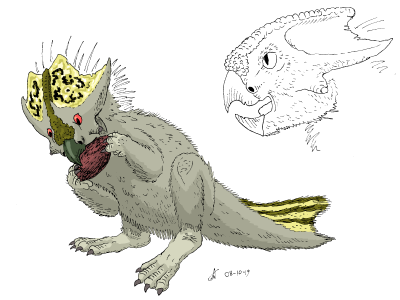 Thousands of generation of selective breeding have molded this ceratopsian (likely a relative of Microceratus or Graciliceratops from Late Cretaceous Earth) into a variety of breeds. Here depicted is a typical medium-sized house breed, feeding on one of the oil-rich seeds that form the foremost part of its diet and justify its powerful jaws and fast-growing beak sheath. In fact, whereas most basal ceratopsians on Nekenalos are omnivorous to some degree, with a handful of specialized predator forms, the Zarmat is strictly herbivorous, receiving all its lipid and protein needs from oily seeds and fruits (not all of which are naturally found in its native range: it could be speculated that this animal was also more omnivorous prior to its domestication at hand of a herbivorous species). Save for its tameness, and a somewhat exaggerated degree of ornamentation (such as the neck quills or tail crest), it does not diverge considerably from its wild ancestors, or close relatives, with which it's often interfertile. Other breeds, developed for swampy or snowy regions, for sports, or to discretely remove vermin, are more divergent.