You are here: start » kazeqen

The kazeqena share a single ancestor, evolved on one planet. This section details how this creature came about, acquired basic sapience, and is expected to function on a biological level.

Basal draconics can be traced back to starfish-like, soft-skinned aquatic creatures early in their evolutionary history. These creatures had three limbs and were incredibly basic, body plan following a simple radial symmetry. They produced tiny, gelatinous eggs.

The three-limbed, soft-skinned “starfish” went on to develop a harder dermis (with bulbous light sensors at the top of a slightly swollen, round-ish central body), allowing them to keep their form and hydration in tidal zones. They followed early plants such as mosses, grazing upon them with a maw on their underside leading almost directly into a stomach. The eggs hardened, and during the hardening phase would adhere to grooves in the skin beside the maw.

The further away the “starfish” were from the ocean, the greater the need became to internalise the eggs to protect them from dehydration and harm. Something much like uteri eventually became of these. Meanwhile the creature developed a skeletal structure - first supportive struts of its bulb-like “body” to allow the creature to grow on land without being crushed by its own weight, then rib-like bones between the struts for protection, and segments for muscular attachment in the limbs. The limb bones eventually began splitting and fusing, resulting in each limb having two elbows and two single-jointed fingers.

At this point, in a particular area of the originator planet, the landscape was starkly vertical, and a rapidly developed defensive tactic was to climb up geological structures. This was helped by fungal structures that threaded through the rock and occasionally left burrow-like canals behind after dying (e.g. due to an infection). This granted herbivores a very short-lived edge - as quickly as the herbivores had developed it as a defensive tactic, the carnivores followed with it as an offensive or tracking tactic.

It was at this time that the conjoining that Draconics are famous for began to manifest as more than an accident of biochemistry (though it had always been more prevalent in their ancestors than one would ever see it in mammals). Three limbs are quite okay for climbing, but six offers a great advantage in stability. Six-limbed conjoined “starfish” could climb to places that three-limbed regular “starfish” could not, and use free limbs to dislodge their opponent.

Again, regular conjoining (having previously not been selected against, but also not selected for, but all in all being far more evolutionarily available than it might be in humans) evolved twice - once in the herbivores, once in the carnivores. Mouths were shared and due to its vicinity, the stomach was equally shared; the circulatory system was shared; the nervous system was shared.

Around the time that one limb of the basal creature (two limbs in the conjoined one) began to differentiate itself as a defensive or offensive weapon and the bones in the limbs became increasingly important, and the creature lifted itself to run (often up vertical structures), the carnivores' mouth split and began to wander from the underside of the creature to the side.

In this species, the eyes started to grow together and rise into a stalk per basal creature, adopting a greater flexibility. The two brains, despite good interconnections, could optionally process visual stimuli separately for less cognitive load of a broader (and constantly changing) overview. (Eyelids were petal-like, peeling back into a curl when open.)

Ever since the “starfish” had begun to crawl onto land, the maws had been stocked with vaguely finger-like protrusions ending in hard, blunt claw-like endings, with their undersides (before the claw) equipped with tastebuds and their tops with scent detectors open to the air. For the carnivores, the claw-like ends had of course gotten increasingly sharp, and now that the mouth was on the side of their body began to protrude to grasp. To give these new weapons adequate force, jaws developed - first in loosely-hinged three parts, then two of the bones fused into the creature's lower jaw, with the third bone curving to accommodate. To take advantage of the jaw, the claws' base began to grow into it, losing any finger-like qualities it had once had. Tastebuds wandered into the 'gums' of the mouth, scent onto the outside of the creature's 'lips' (simple protective skin over the maw to prevent the mouth cavity from drying).

Jumping and (in some cases) running became more important in pursuit of prey from hoodoo to hoodoo, and one limb per basal creature (two limbs per conjoined creature) became noticeably longer and stronger than the others. Jumping and running happened on two limbs; during latter, the remaining limbs were used to steer or break a fall.

A membrane developed between the limbs to allow gliding. By this point, the mouth had travelled up the creature's body so much it had merged into the eye stalks and indeed protruded further than the eye on the eyestalk, allowing it to be used as a weapon without losing the benefit of the jaws. External sensory strips for scent ran along most of this new 'snout'.

As the spatial awareness necessary for navigating hoodoo 'forests' in pursuit of prey increased cognition, tool-use began to become an option. The membrane was a hindrance to this, however; and so one of the three basal creature's limbs 'freed' itself and gradually allowed for greater manipulative precision.

This led into the proto-dragon.

An example outline of a half-dragon, showing the range of motion of the limbs: 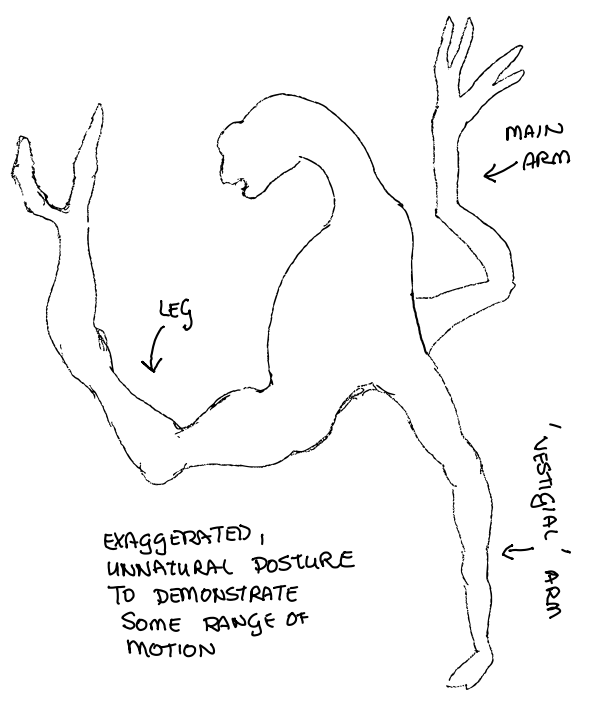 Note that these creatures are not optimised for strength at this point in their evolutionary history - neither their prey nor they themselves have strong grips. The grips are sufficient to deal with their own body weight when moving, but not much more.

A 'more natural' posture of a half-dragon, assuming conjoining (itself not depicted): 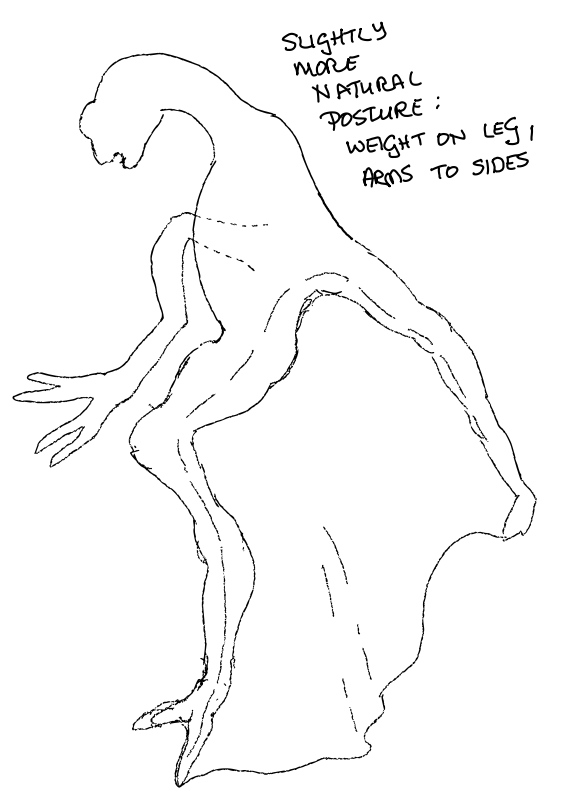 If a half-dragon were living solo, its natural posture would be described as 'splayed on the ground'.

In brief, this is how one should picture a conjoined dragon: 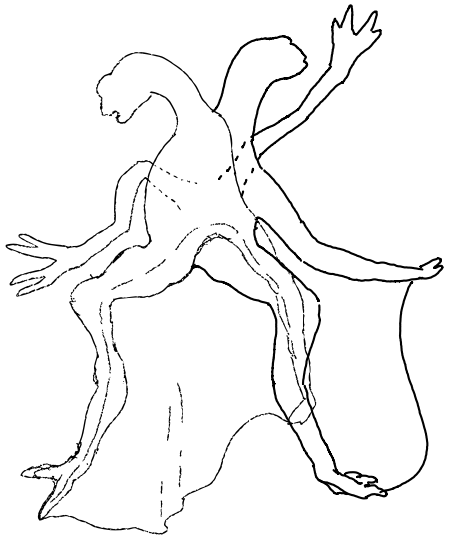 Due to the extreme symmetry of the halves, most illustrations on this page will only bother depicting a half-dragon.

Proto-dragons typically climb and glide, although they are also capable of walking. Here are some common wing arrangements when gliding: 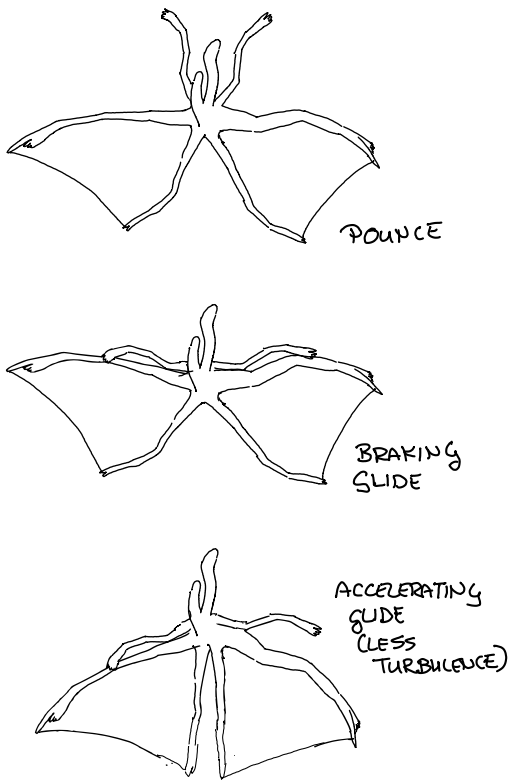 It should be plainly obvious that this form of gliding does not easily lend itself to evolving to powered flight. As such, most extant Draconics derived from the proto-dragon do not possess this trait.

Some hints as to the skeletal system: 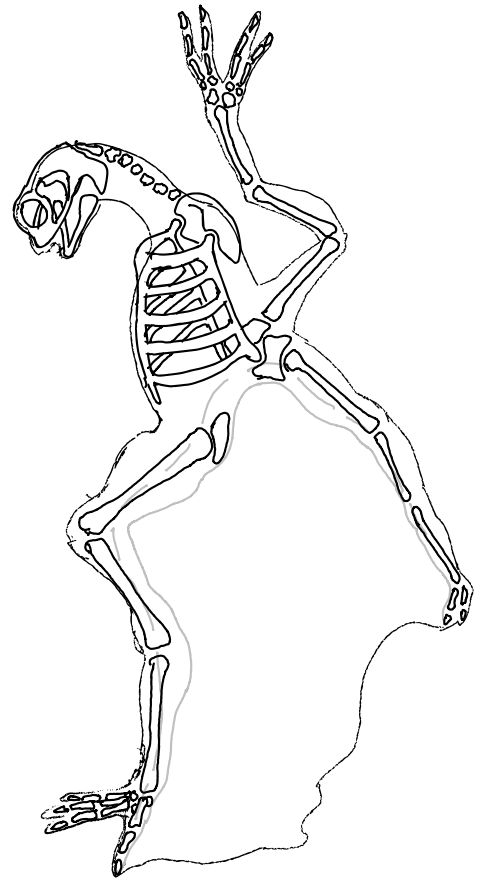 There is no spine, per se, although the neck has supporting ossicles that have a similar function. The foot's necessary flexibility, having to support climbing, gliding and the occasional walking, cannot sustain long stretches of running, but usually does not have to. The longest toe (the one the membrane is attached to) has a wide range of motion to accommodate for the modes of locomotion:

Organ placement in proto-dragons seems arbitrary and strange when looking at them out of context of their evolutionary background:

The main brain of a half-dragon has never left the torso to wander up to what began as eye stalks, meaning that it lies within the 'rib cage' of the creature. The heart and single lung can still switch to modes relying on assistance by the compression occurring due to locomotion, putting them near the most pronounced limb's joint. A proto-dragon sitting still and breathing will have rhythmically contracting thighs pulling in air through slits in the skin of said thighs. Only the gastrointestinal system seems normal, although it one additional pouch for intermediate food storage after the stomach has been passed: 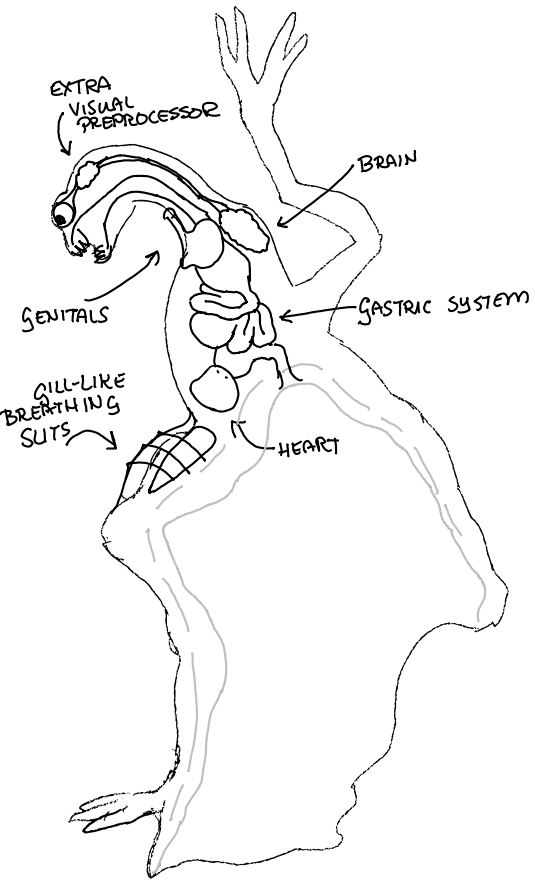 Other organ-equivalents (liver, kidney, glands) exist, but are not depicted here. 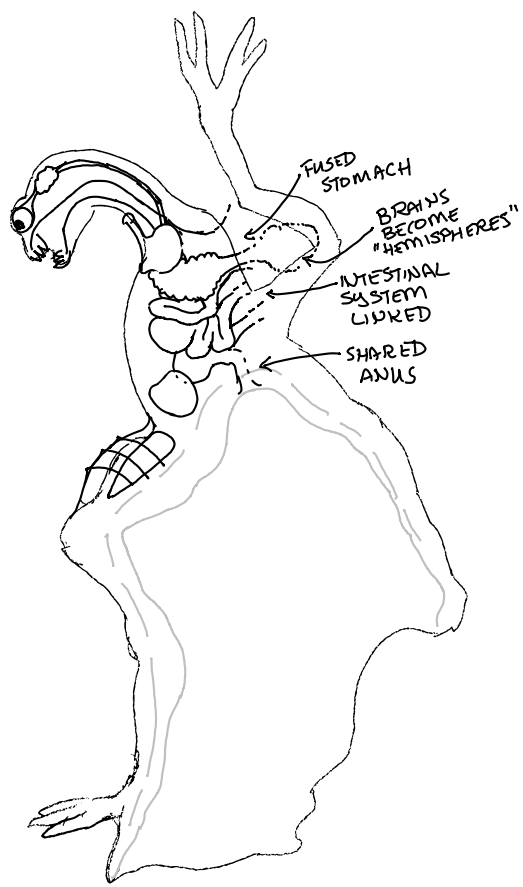 Proto-dragons are hermaphrodites; sex is not determined by genetics but by biochemical balances while growing. The 'dominant' half (which may mean as little as 'fractionally further along in development') of the conjoined dragon will adopt female characteristics, whereas the other takes on a 'male' role. In theory it is thus possible for a proto-dragon to fertilise itself; in practise the placement of the genitals makes this prohibitively difficult.

Proto-dragons have their genitals in the form of a tube running roughly parallel to their esophagus, open about halfway up the throat. The 'clavicle' protects the actual sex organs this tube leads to, although testes tend to protrude far enough past it to be visible like bumps or symmetric throat sacs. Ovaries and 'wombs' instead lie deeper, nestled against the rib cage.

As baby dragons become larger and use up the nutrient storage given to them (as there is no umbilical cord), they move from the small womb into a marsupial pouch, where they are then typically fed with regurgitated food from the respective other parent until they in turn have enough strength to cling to their parents' bodies.

Adult proto-dragons copulate by resting their necks against each other to align the tubes:

As one might expect, proto-dragon genitals are very sensitive to touch. Their ability to detect even fine perturbations has ultimately made them the basis of their hearing apparatus (which, however, has since detached from the genitals themselves and wandered as a kind of tympanum to the back of their 'skulls').

A male and female 'head' differ not only in the way the associated genitals form. A female head is larger and made for attacking and rending prey, but lacks a lot of fine motion it might otherwise have. A male head on the other hand has fine motion, but no jaw strength, instead having a narrower muzzle that can be used as a kind of additional 'hand' when needed.

In very rare cases, it's possible that a dragon is a conjoint of two females, but due to the break in useful symmetry for gliding, this does not form functional adult - as soon as the creature is left to fend for itself in nature, it will rapidly die.

Biochemically speaking, a non-conjoined proto-dragon is still functional, but its asymmetries make it a poor adaption for nearly any conceivable environment. Modern sapient dragons rarely have children that revert to non-conjoined form and can survive to adulthood, but if they do, these tend to be sub-sapient, but well tended for, and they can live long lives. Societally they are usually considered cripples - although Draconic culture is varied enough that one can encounter nearly any possible interpretation of the condition.