You are here: start » kumivak 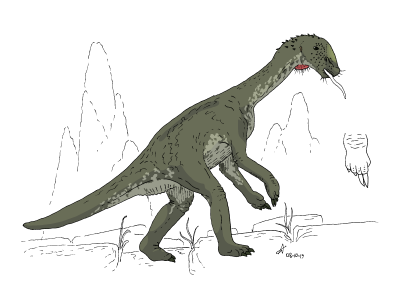 The kumivak is an instructive example of how much the evolution of sauropods on Nekenalos diverged from their ancestors of Earth. Despite being a member of the titanosaur clade, it bears little obvious resemblance to the colossal quadrupeds that are known by this name. Some thirty million years ago, a certain species of titanosaurs gave birth to calves that frequently rose on their hindlimbs to browse on shrubs and used their forelimbs to pull down fruit-bearing branches before moving into the open plain with the adults. Through neoteny, this species gave rise to a vast clade of small-bodied, bipedal titanosaurs with forelimbs specialized for food collection. In the kumivak's case, this means breaking open termite nests in the same arid brushland that was the cradle of the murehej. The second and third digit bear large claws apt to break through thick walls of packed dirt, while the others are highly reduced. The relatively long hindlimbs and the generally light build allow it to follow kilometer-long routes every day in search of fresh nests, as allowed by the wealth of proteins found therein. Symbiotic bacteria in its stomach produce chitinase to break down the cuticle of swallowed insects, improving considerably the energetic rewards of each meal. Many features of his face - the small eyes hidden by heavy eyelids, the forward-facing facial scales, the nostrils placed on a fleshy stalk pointing back and up - reflect the necessity to protect its sense organs from the assault of its own preys.