It's important to understand that tattoos follow their own alphabet, but it nonetheless is an alphabet. Having a Nayabaru tattoo is like wearing a shirt with your profession displayed on it in large letters.

However, there are strong regional variations to the designs for specific tattoos, which may be a hindrance to ease of understanding. The farther a Nayabaru travels, the more likely their tattoos are to be difficult to understand or outright unintelligible without careful scrutiny.

Which body parts are marked by the tattoo tends to depend on the profession (although here, too, there may be regional variations):

The one thing that Nayabaru culture agrees on is that a Lashal's tattoo must either initially or eventually cover their entire body. While they would never word it that way, the idea is that the death of the Nayabaru is almost assured if there was ever a reason for them to lose their tattoo.

Lashala are responsible for the application of tattoos. This is not usually a one-time matter, but a ritual recurrence - tattoos will fade with age and need to be freshened at regular intervals.

The Nayabaru make a difference between the glyph logic of vowels and consonants.

The consonants are defined by three segments that have specific angles to each other, combined with two possible strokes.

The tsha͡um (“sharp”) stroke brings the angled segments together in a sharp-tipped manner, each running together as two (or in the rare constellations where more than two segments share a single joint, all three) distinct lines with their own flow.

The fega͡uri (“hollow”) stroke brings the segments together as though they were being nestled against an invisible circle at the joint and merges the flow of the segments into an inner curve.


The angles themselves are defined through a triangular grid forming a basal hexagon (or for particularly wide-angled ones, two overlapping hexagons).

(Our example symbol does not fit onto this grid and indeed forms no consonant, although the glyph for K or TK come close, and the example symbol might be interpreted as a sloppy rendition of these consonants by Nayabaru who see it.)

The length of individual segments as well as the rotation of the entire glyph are irrelevant. Take for example the letter T. All three of the following arrangements are the letter T:

Similarly, for the strokes, the direction of the joint can be arbitrary (although there is usually only one obvious aesthetically pleasing arrangement, unless the joint is combining segments at a 180° angle):

Vowels are (potential) combining glyphs, often drawn across the segments of consonents to bind them together. The following vowels have established glyphs:

Arbitrary vowels can be combined into digraphs (e.g. here into the fantasy digraph yu):

It's worth emphasising that vowels do not need to be drawn with a bridging element, although this is often done. See the examples section for visual examples of the difference.

There are 15 different angular arrangements in use, combining with the two strokes into 30 consonants. Here they are, arranged for ease of human consumption:

This is how the Nayabaru would arrange them when teaching the meanings to young Nayabaru:

Given the rotational freedom of consonant glyphs, the arbitrary length of segments in consonant glyphs, and the choice whether or not to use a bridging element in vowels and whether or not to use them as consonant brackets, Nayabaru have vast freedoms in expressing titles in aesthetically pleasing ways. As an example, the title Hesh could be rendered so (E without a bridging element, bracketing an each well-proportioned H and SH): 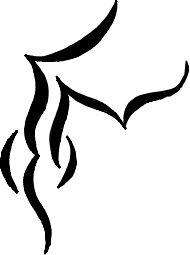 Or like this (stand-alone E with a bridging element, SH with one segment exaggeratedly long, H well-proportioned):

Or like this (E with a bridging element, bracketing an each well-proportioned H and SH): 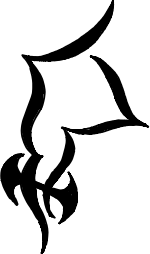 The tattoo system has several other degrees of freedom allowing for aesthetic variations. The different Nayabaru regions have different degrees to which they prefer legibility over ornamental designs. To see examples of the variations, see the Nayabaru subculture article.