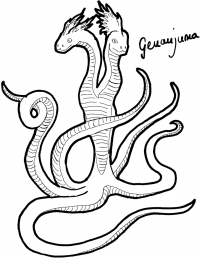 Genanjuma is generally considered acorporeal, with an ability to selectively manifest himself. He takes on many forms, be it purely for communication (in which case the forms are intangible) or to assist in a kavkem's suicide (in which case he is necessarily tangible).

Regardless, most depictions show Genanjuma as a two-headed, five-tailed constrictor. One head advises on courage, the other on qasai, although they never speak simultaneously and are not in any conflict with each other. When assisting in a kavkem's death, four of Genanjuma's tails restrain the limbs while the fifth crushes the victim's lungs; one of the heads will cover the kavkem's muzzle to further restrict breathing, while the other may continue to speak, usually encouragingly.

As he is mostly acorporeal, it's assumed the Nayabaru couldn't do anything about him even if they tried.

He is considered a kind of manifestation of kavkem culture, waxing and waning with the strength of kavkem convictions as a whole. If the kavkema went extinct, Genanjuma would cease to exist (although he is never ascribed any existential fear about this - naturally, as being the god of courage and qasai would make this quite out-of-character for him).

He prefers to give kavkema courage first and qasai only second, but is considered an extremely good judge of when the one or the other is needed. In either case, he will never do anything without the explicit consent of the kavkem.

The belief in Genanjuma is especially wide-spread in the organisation Shy͡ilun, based on Akynkulla as they are. For the religiously inclined, Genanjuma serves as a promise to the bold warriors of Shy͡ilun that they need not suffer eternally even if their mission fails.