“By now, the kavkema are well adapted for high-altitude life – especially the temperatures. They'll have many more feathers than you may remember them having.” A Thread Between The Stars: Satellites

Their name likely etymologically stems from the word kavama (which to them now means hatchling capable of speech).

The kavkema on Nekenalos have been in steady decline ever since Terenyira entered the picture, helping the Nayabaru with the “de-facto genocide”1) of the kavkema.

Kavkema are bipedal, with their spine held horizontally, leading into balancing tail. They have long, flexible forearms that they can use to walk quadrupedally, the additional support of which they prefer when low on energy. When running, they prefer bipedal locomotion, tucking their arms against their chests, partly to streamline themselves and partly to prevent wrist damage, since their wrists are not designed to bear the increased associated forces. Their tail is rudder-like as that of their ancestors, assisting with rapid changes of direction during a run.

While fast, they're sprinters and ambushers and can claim no notable endurance.

Typically, they are superprecocial once they hatch (after six weeks of growth in the egg), though if left to their own they certainly will only ever be a wild animal. To save them from the very specific dangers of Nekenalos and to educate them in language, religion and potential sciences, they require parental protection at least until they are one year old (at which point they may have learnt as many as two languages and many practical survival tips), and usually stay with their parents for up to four years, circumstances permitting.

In captivity, kavkema may get as old as 40 years, assuming they are treated well (the kind of captivity in the Pens tends to reduce their lifespan, not raise it - 40 year old kavkema tend to be pets). In the 'wild', they often die before they are 25, though cases of 30-year old wild kavkema are known. 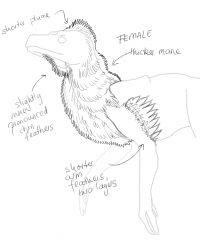 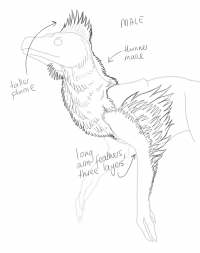 Dimorphism in kavkema mostly manifests in a noticeable size difference - females are sturdier and larger than their male kin. But there are also some differences in the commonplace distribution of feathers: Females have thicker manes, shorter plumes, and fewer decorative arm feathers than males.

Apology is denoted with a significant dip of the muzzle. Greetings follow a similar gesture, although less pronounced. A confirmation is given with a raised muzzle's side to side swerve; the gesture can range from very subtle to an enthused shake of the head, but there is always a sway or twist to the motion. Negation is expressed with a single upward flick of the muzzle, with intensity conveyed by the distance covered by the tip of the muzzle.

It is courteous to be facing each other at all times, and it can cause quite some distress if a kavkem is approached from behind or even just the side, and this is generally viewed as an act of aggression if not announced beforehand or a strong emotional bond exists.

As kavkema are constantly on the move and few in number, their tool use is necessarily limited. While they are intellectually entirely capable of understanding electronics, they only sometimes date scavenge them from the Nayabaru. Materials frequently used are (usually small amounts of) leather, which kavkema most industriously use for ropes, stone, flakes of which are used as blades, and wood, which is carved into shapes that leather would not keep.

Almost all wild kavkema wear a so-called tool necklace. The format of this varies, but it is usually more of a choker than a free-dangling string, as former is less likely to get caught in branches. It often consists of two strips of leather rope bound to each other in parallel at some distance (although as nothing prevents them from slipping closer together, the parallel design rarely stays perfectly aligned), the binding rope in turn knotted to the ropes at regular intervals.

Other items are made for carrying by yet other ropes, which tend to either lend themselves to sturdy knotting, or are attached to carved wood hooks for easy temporary removal from a tool necklace.

Items carried on tool necklaces vary, but most wild kavkema will have at least the following items on their tool necklace: 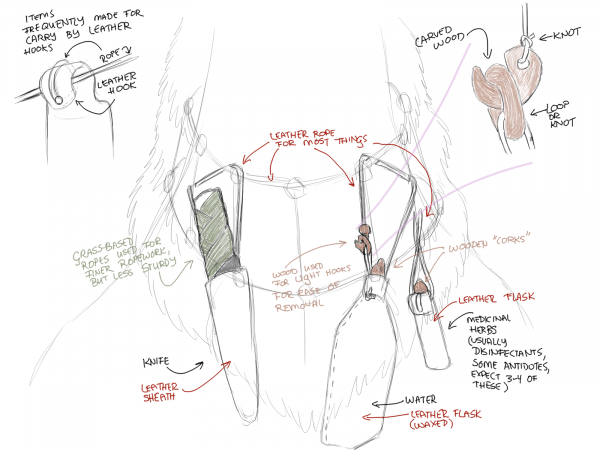