Ateheril (from atehar (story) and heril (destiny, fate)) is a minor deity or demigod in the kavkem mythologies of Ne͡imakanaas̈, derived from a fundamental force known to the believers of Vahrs̈elos. The associated stories have been frequently adopted in variation by believers of other faiths as well. 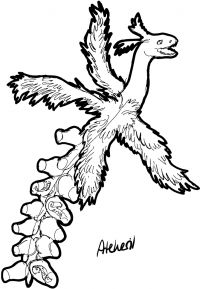 Ateheril has a form neither in Vahrs̈elos nor Ne͡imakanaas̈, although abstract artistic depictions may render him as an agalmatid, quite similar to our Marrus orthocanna, with distinct vase-like protrusions storing paper slips. The 'fuzzy' tail may have a flower-like arrangement around a serpentine or amphibious head, allowing the deity to have a mouth to speak with, though some depictions may just allow the deity to speak in a disembodied manner.

In belief systems where deities are more traditionally visible, this depiction has come to be considered Ateheril's canonical form, although he is occasionally simply displayed as a living, undulating story staff (a simplified form of the same concept).

In Vahrs̈elos, Ateheril is the name of the force that drives ocean currents and winds. In Ne͡imakanaas̈, Ateheril is considered a potentially real (but thus never observed) metaphysical entity that may have cast the illusion that afflicts the world.

This general framework tends to be transposed to other belief systems as a deity of stories and of fate, who guides vessels at sea either to safe harbours or the clutches of the Nayabaru, and who decides where birds may fly to guide kavkema on land. Ateheril's motiviation is considered to be witnessing a good story. It is thus possible to bargain with or influence Ateheril's decisions by making certain outcomes more narratively pleasing1).

As with Sanarama, being primarily conceived by the adherents of Vahrs̈elos, Ateheril has no history in any real sense - no deities have created him and there is no one force in the universe that could be said to have fathered him, other than perhaps space and time itself.

The notable exception is Ne͡imakanaas̈, where Ateheril is the originator of the visible world as a whole, giving him primacy over every other deity of the pantheon (inasmuch as they exist within the illusion).