Manevash (from manem (teacher) and ke͡ivash (language)) is a minor deity in the Taaravahr pantheon, sometimes encountered in the tales of Akynkulla, Kiivenara and Vahrs̈elos. He is considered an autonomous fragment of Tamas̈elu and represents a metaphysical manifestation of language and communication. 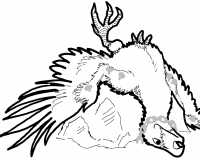 Manevash has a basal appearance of a very large, brightly coloured parrot. Considered dashingly handsome (for a bird), the colour of Manevash's feathers will vary entirely by artist or story-teller, following their aesthetic preferences.

In a strong deviation from the appearance of actual parrots, Manevash has a head crest much like Parasaurolophus (although much narrower, almost like a bony feather), and despite bearing the distinctive beak shape of a parrot by default, he is generally considered to have cheeks and lips, allowing Manevash to have a facial expression as rich as any Nayabaru, should it prove necessary.

Manevash is a peaceful fragment of Evenatra and credited with an attempt at a diplomatic resolution to the tensions between kavkema and Nayabaru, well before either species could speak. He taught the kavkema language, writing and the value of verbal culture, then went to the Nayabaru to do the same.

Partway through the process, the Nayabaru understood enough to judge his plans of reconciliation by its merits, but chose to reject the notion, not convinced that there was a way to salvage the conflict through communication. Yet rather than send him away, they captured him as they might have any other ally of the kavkema, and locked him away. In some further interpretations, Naya as a language exists specifically that his guards can understand each other, but not Manevash himself.

As Manevash is immortal, like any deity, he is presumably still locked up even now. The kavkema who believe in Manevash may ascribe the tattoos the Nayabaru have on their bodies to the desperate cries of the deity (especially the unintelligible, tightly wound Lashal tattoos), seeking the only canvas he has access to in his imprisonment.

Those who have had the rare and questionable pleasure of hearing the Karesejat speak might further attribute her silver tongue to powers bestowed upon her by Manevash, perhaps in exchange for some desperate bargain (such as a little less torture). It's presumed that Manevash's only hope is likely to be his own ability of persuasion, should he be able to use it - while his whereabouts are only speculated about, most kavkema put him somewhere near Katal, and no one is ever rescued from Katal.