Sanarama (from sana (relief) and ramas (to ensure, to promise)) is a minor deity in kavkem mythology. She is considered to be responsible for the very existence of antidotes and cures for toxins, disease and all forms of madness and features especially in Vahrs̈elos, although her stories have occasionally been ported to other kavkem faiths. 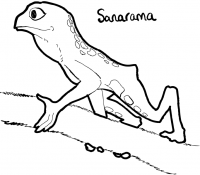 In Vahrs̈elos itself, the primal Sanarama does not have a form, of course, being a force of nature rather than a tangible deity. When her power does coalesce into a tangible deity, Sanarama typically takes on the form of a frog.

Her personality is generally considered to be dreamy and contemplative - as one might expect from a Vahrs̈elos-designed deity, she is not very talkative, and does not go out of her way to interact with kavkema. She is not strictly impolite, but she is known get lost in her thoughts while contemplating an answer to questions posed to her, simply forgetting that a question was even asked. When seeking her out, it is thus recommended to ask more than once and, if it is at all possible, present her with a limited set of possible answers to choose from, rather than awaiting a full freeform narrative.

Sanarama (be it the deity or the force of nature) is the very essence of a passionate scientist. Practically omniscient (but hyper-focused in her attention), Sanarama observes the creation of diseases and toxins, be it by nature or design (e.g. by the Nayabaru), and immediately creates an antidote for each of them as they appear, ensuring it is accessible in nature.

Due to her reclusive nature, this is not necessarily any help - the antidote may be arbitrarily difficult to find and Sanarama is likely no easier to find (and interrogate). All Sanarama gives the kavkema is the assurance and hope that a cure for an affliction must exist somewhere.

Being primarily conceived by the adherents of Vahrs̈elos, Sanarama has no history in any real sense - no deities have created her and there is no one force in the universe that could be said to have fathered her, other than perhaps space and time itself.