The Theruasha (from theru (hunt) and arash (two)) are twin deities of the hunt, initially described by the Kiivenara faith, although their stories have travelled far and wide by now and are selectively adopted by individual kavkem groups even beyond Kiivenara.

The two deities are known as Mekitherun and Raas̈therun individually. Being deities of the hunt, they are generally considered female (as females lead the hunt). 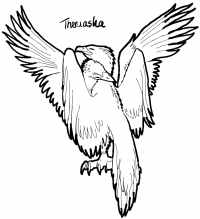 Both Theruasha are typically depicted as birds of prey (we might liken the depiction to an osprey or eagle, though Nekenalos knows neither family) - large enough to be a potential threat to adult kavkema, small enough to plausibly manoeuvre even through forested areas. They are visually almost identical but for their eye colours. Raas̈therun's eyes are blue, whereas Mekitherun's eyes are a dark amber. That said, neither deity would reject magic that would temporarily change their eye colour, so it's generally advised one be very, very careful in dealing with the Theruasha.

The Theruasha are considered to have come from the broken fragments of the ur-planet, back when Tamas̈elu cleaved it in two to make one into Nekenalos. The fragments hovered between the two planetary halves and might have forever lost themselves in the void, if the one closer to Nekenalos (Mekitherun) had not awoken first, and began to make its way to safety. When the other woke only moments later, the urge to stay with its counterpart outweighed the urge to drift to the closer world.

The Theruasha are hunting deities, but their domains are still strikingly different:

In some depictions, the abstraction is done away with altogether; instead, Mekitherun is simply the hunter with kavkema, and Raas̈therun the hunter of kavkema. The difference is merely in whether the kavkema are the subject or object of the hunt.

Note that despite being an enemy of the kavkema, Raas̈therun is not considered in any way affiliated with Tkanetar (nor Terenyira in those contexts where she is considered a manifested deity).

Relationship with each other

The Theruasha are considered to be undividably close friends, effectively amanata. They will not tolerate any attacks on each other, regardless how supposedly justified it might be (such as kavkema trying to defend themselves from Raas̈therun). They're known to exchange any and all knowledge they gain about hunting tactics with each other - ensuring on the one hand that the kavkema will learn new methods, but on the other that the Nayabaru do the same.